A spirit invasion: the baptism of Jesus and the Capitol Hill insurrection

The beginning of the winter semester often coincides with the church’s commemoration of Christ’s baptism. This year the start of the semester also coincides with something else: images and news from around the world of anti-democratic forces at work. On the Feast of Epiphany, the day the church remembers the manifestation of Christ’s glory to the Gentiles, these anti-democratic forces were manifest for all to see. In Hong Kong, dozens of former lawmakers and opposition activists were arrested under the territory’s draconian new national security law. In the United States, of course, the president urged his followers to storm the Capitol, and they did precisely that. 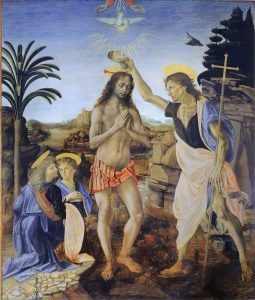 The conjunction of Christ’s baptism and last week’s events made me listen in new ways to this line from yesterday’s gospel reading: “And just as he was coming up out of the water, Jesus saw the heavens torn apart and the Spirit descending like a dove on him.” (Mark 1:10) Depictions of this often seem rather gentle: a white bird hovering over a radiant, dripping Jesus. But there’s violence in this verse. The heavens are “torn apart.” The word translated “descending” can also mean something like “invade.” Those verbs describe Jesus’ baptism. They could also be used to describe last Wednesday’s events.

It’s a good thing the Spirit invades Jesus. Right from the start of his ministry, Jesus encounters demons and other spirits who recognize him and try to obstruct his work. In exorcising them and casting them out, he demonstrates his power (and that of his Spirit) and the imminence of the kingdom.

Language of demons and spirits can be hard for some readers in the 21st century to understand. But as I watched the events on Epiphany unfold this year, I wondered if what I was seeing was another manifestation of spirits in this world. We could call them the spirit of domination and control, the spirit of white supremacy and violence, the spirit of disinformation and untruth. These spirits need to be exorcised from the body politic wherever they are found. They are antithetical to Christ’s kingdom.

That’s easy to say, but harder to do. It’s made even harder by the fact that I am made uncomfortable by militaristic language like “invade” wherever it is used, but especially in relation to Christ and his followers. There was far too much Christian symbolism and iconography on display at last Wednesday’s storming of the Capitol, a result at least in part of the too-comfortable melding of Jesus and violence. Jesus’ ministry may begin with an invasion but it ends with him as the victim of a disinformation campaign that leads to his death. The passion and resurrection reminds us that the power Christ gives his followers is one that comes not from lording it over others but by becoming servant and slave of all (Mark 10:41-45).

The baptismal calling of Christ’s followers is the same as Christ’s own baptismal ministry: the recognition and defeat of the demons and powers of this world that stand in the way of the realization of Christ’s kingdom. But we do this not by locking up those who oppose us or obstructing democratic order. Instead, the baptismal covenant calls us to “seek and serve Christ in all persons” and “strive for justice and peace among all people, and respect the dignity of every human being.” It is, as Christ’s was, a challenging, energizing, and cruciform calling. And in a world like ours, it is a calling that is needed more than ever.

This message was written by Principal Jesse Zink for this week’s Wingèd Ox, a weekly news digest distributed to the college community.