One of the assumptions people have made when they hear I’m an historian is that I do genealogies. To be totally honest, outside of a family tree project I had to do in kindergarten or first grade (from which I apparently excluded one of my parents), I haven’t done much genealogical work. I have hopes of putting my professional historical research skills to work doing one at some point, but for the time being, it remains in the “future projects” folder. I’ve had genealogies on my mind and heart a lot lately, though, thanks to the Matthew course I’m teaching this fall.

Matthew’s gospel begins, not with the infancy narrative, but with “an account of the genealogy of Jesus the Messiah, the son of David, the son of Abraham.” This particular passage (1:1-17) has, in my opinion, the dubious honor of being one the most-important-yet-almost-never-preached passages in the Bible. It never occurs in the Revised Common Lectionary, and it certainly doesn’t show up in Christmas pageants. Who goes to church on Christmas to hear a bunch of barely-pronounceable names read out loud? Probably no one. We go expecting to hear of Luke or Matthew’s stories, and perhaps to see a Christmas pageant that attempts to mash the two together. 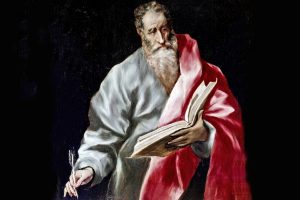 When we ignore the genealogy, though, we miss something vital in the Gospel message. The names Matthew presents us with—among them Abraham, Jacob, David, Solomon, Tamar, Rahab, Ruth—provide a particular narrative about how God works in the world. (This genealogy is a great guide for a congregational Bible study, by the way!) Just take a few of them—Jacob was a trickster. He tricked his ill and dying father into giving him the birthright that really belonged to his older twin, Esau. David committed adultery with Bathsheba and had her husband, Uriah, killed. Rahab was an innkeeper and/or prostitute in Jericho before Joshua and the Hebrew army destroyed the city. She protected the Hebrew spies, who then promised to protect her. She was a consummate outsider, yet she was brought into the covenant. The same can be said for Ruth—another outsider who was brought to the very heart of God’s promises to humanity.

The genealogy of Matthew shows us that God does not necessarily use the strong, powerful, rich, and mighty people of the world to help usher in God’s kingdom. Rather, God calls the tricksters, the outsiders, the immigrants, the lowlifes, the liars…the list could go on and on. It is such as these with whom God chooses to share the promise of love and blessing, and Jesus continued that pattern. We are called to do the same.

If we were to sit down and create genealogies for our own families or—perhaps more interestingly—for our parish communities, what would they look like? Do they include the outcasts of the family or parish, or do they focus on only the righteous? What kind of message would those genealogies send to the larger community? I encourage you to take some time to sit with Matthew’s genealogy, and to think about the genealogies of which you are a part. What messages and promises have been passed to you that you have been called to pass on? Where is God’s promise of unconditional and unending love sending you next?

This message was written by Director of Pastoral Studies, Rev. Dr. Hilary Bogert-Winkler for this week’s Wingèd Ox, a weekly news digest distributed to the college community.