Coming Back to Ministry 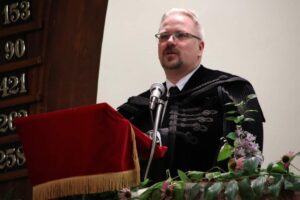 Aron Molnar is a student in UCS at Dio’s Admission Ministers program, which prepares ministers from other denominations for ordination in the United Church of Canada. He began his career in the Hungarian Protestant Calvinist Church in Romania and after a nine-year break from ministry he is preparing to take on the role of minister at the Hungarian United Church of Montreal.

Aron grew up in a Hungarian family in Romania. “Back there, there is still more of an expectation that families go to church. So, my Christian background is rooted in my upbringing. My family was very involved in the church as music leaders.” He knew from the age of 14 that he wanted to go into ministry. After graduating from a Christian high school, he began attending a theological college in Hungary. “I tried for four years in a row to get into the Protestant Theological Institute of Cluj-Napoca in Romania. There were 97 applicants and only 9 places. So, I went to the Reformed Theological Academy of Sárospatak in Hungary where the attendance had recently dropped. And then, with a transfer, I got back to my home country where I initially wanted to go.”

From 2006 to 2013, Aron worked as a minister in various congregations. “I got contracts for two years to work as a minister somewhere and then when the two years were over, I had to go. This was very hard because we couldn’t build anything. So, after the third or fourth move I told my wife ‘we’re going to move one more time but it’s going to be across the ocean’.” In 2013, Aron moved to Montreal with his wife and young daughter. Shortly after settling in Montreal, he began working in Laval at the Distinctive Appliances inc. warehouse and became involved in the Hungarian Catholic Church where he works as the music director.

In the fall of 2019, Aron received a call from the chief elder of the Hungarian United Church of Montreal. “He told me that their pastor had resigned, and asked me if I had any schooling in Protestant theology. I said, ‘not only do I have some schooling, I went to the exact same theological college as your previous minister’.” He proceeded to give a few sermons at the church and eventually the elders met and decided to invite him to be their minister with the condition that he begin the process toward ordination in the United Church of Canada.

The faculty at UCS at Dio are crafting a program to help him fulfill the ordination requirements for the United Church, so he can return to the work of ministry. “I’m grateful to the faculty at the college who really supported me from the beginning even though I was an unknown name,” he says. “Without that support, I would just have to throw everything out the window.”