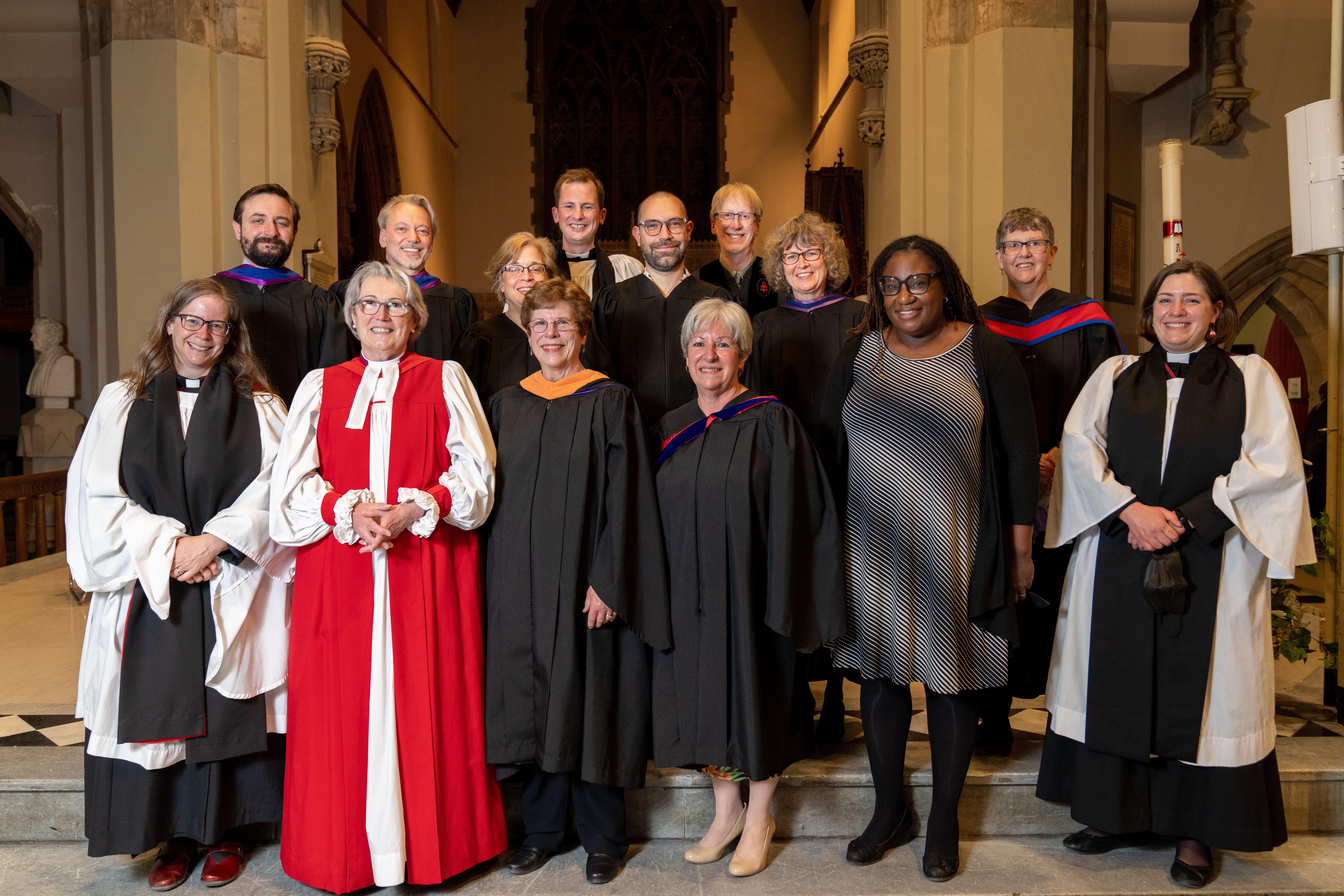 After two years of Zoom convocations, the college community was delighted to gather in person at Christ Church Cathedral to celebrate our graduates as well as the deepening of our relationship with the United Theological College. It was a truly ecumenical and bilingual affair, including hymns and prayers from the Anglican and United Church traditions, and clergy and guests representing both denominations and beyond.
The honorary Doctorate of Divinity was conferred by UTC on the Rev. Catherine (Cathy) Ann Hamilton for her impact on the vitality of French ministries in the United Church of Canada. A special award was given to Patty Evans, chairperson of the UTC Board of Governors, for her tireless work over the past two years as UTC has discerned a future with Dio.
The convocation address was given by Adele Halliday, Anti-Racism and Equity Lead for the United Church of Canada. Earlier in the day she gave a public talk at St. James United Church on building an anti-racist church, providing a helpful framework and useful tools that will enable communities of faith to engage in active anti-racism work. In Adele’s convocation address, she reflected on the story of doubting Thomas and noted that our Christ is a wounded Christ, and that as his followers, we are called to embrace brokenness. She encouraged the graduates to begin a “trauma informed ministry”, and to use their own experiences of brokenness, of belonging, and of not being believed, to create space for racialized people in their ministry contexts.

Awards given out at convocation:

The Gault Award, made to the final-year student who, in the opinion of the judges, shows the best combination of personal maturity and readiness for ministry: Bram Kranichfeld
The Bancroft Prize, for a theological essay: Ben Crosby
The Robert Reford Prize, for the leading of worship. Based on the conduct of Morning and Evening Prayer in College Chapel, in the normal course of the daily schedule: Sarah Wicks
The Lachlan Gibb Award, for preaching: Sarah Killam
The Canon Mark Beaufoy Award, for the demonstration and development of pastoral skills: Bram Kranichfeld
The Alys L.G. Slater Memorial Bequest, for proficiency in Anglican studies: Alex Griffin
The Lionel Temple-Hill Prize, in memory of Lionel Temple-Hill, a 1938 graduate of Dio and 1976 honorary doctorate recipient: Peter Lekx
The Rev. Canon Dr. Lettie James Prize, for feminist or pastoral theory: Jessica Gauthier
The College Prize for Academic Achievement in the Master of Arts Program: Tevfik Karatop

Bishop Russel Brown Award, awarded to the student who made the biggest impact on the community life of the college over the year, voted on by the student body: Norman Robert Boie