Training messengers of the gospel: why I give to Dio 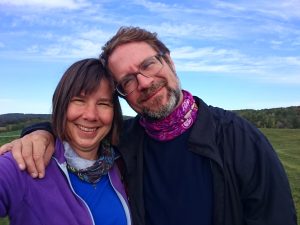 Sabine Schnittka is a regular donor to the college because she is keen to support the next generation of God’s messengers. She reflects on her spiritual journey and how she has reconnected with God and the church.

As I grew up in Wanne-Eickel, Germany in the 1970s, I had the privilege to learn about Jesus. My parents taught me prayers and took me to the Lutheran neighbourhood church, where I apparently enjoyed Sunday school, as shown by my drawings, which my mother still keeps in a small binder. As soon as I could read, I read a lot and I remember that I regularly enjoyed reading stories in my Children’s Bible.

In the 1980s, I was confirmed in the Lutherkirche in Bochum-Dahlhausen. At that time, confirmation was still a rite of passage which nearly everybody attended. The fact that there was usually a family celebration – with gifts involved – did help, but it was also just something “normal people would do”.

For some years after confirmation, I still kept to church circles. Youth bible group, a church-subsidized trip to Sweden and another to Norway, with Bible study in the morning, outdoor stuff in the afternoon and songs accompanied by a guitar in the evening.

In the 1990s, I felt I was too grown up to believe in such irrational concepts as resurrection and mysterious healings. I studied physics and philosophy and ended up doing a PhD on the French philosopher Jean-Paul Sartre. The choice of an atheist philosopher was not coincidental. I also made a point of unsubscribing from church tax (which still exists in Germany) – which was sort of hilarious because, as a student with only summer jobs, I had absolutely no taxes to pay.

So, I had definitely turned my back on God – or so I thought.

But the Good Lord had not turned His back on me. In 1999, while I was still working on my thesis, in the pretty French town of Nantes, I met Vincent, my future husband, in circumstances that I cannot describe as anything but highly mysterious and even wonderful. At that point, even though Vincent had grown up in a traditional Québécois Roman Catholic family, he was a convinced materialist, refusing the assumption that there was anything but what you can touch and see. Also, he took pride in the fact that his daughter (from a previous marriage) was not attending the religious instruction at school that was, back then, still offered in Québec. See how well we fitted? Two peas in a pod.

Between 2001 and 2009, we were blessed with four wonderful children. And over the years, somehow, God reeled us back in, to a different, chosen and affirmed form of faith. How did we come to this change of mind and heart? Vincent had discussions about God and the world, over the Internet, with an Anglican priest in Scotland. And I somehow felt our children should not grow up without hearing about Jesus. We decided to send our kids to Marie-Clarac School, a school run by les Soeurs de Charité de Sainte-Marie, and our contact with this welcoming and caring congregation motivated us further to go back to church or rather to churches, Anglican as well as Roman Catholic.

In 2012, our children were baptised in the Anglican Church, in Mascouche, and in 2018, two of them were confirmed by Bishop Mary. Our youngest has expressed the wish to be confirmed in the Roman Catholic Church, before the pandemic cancelled all plans of that kind.

Now, I wouldn’t say we’ve figured it all out. In fact, I personally never quite got back the feeling of belonging to a specific congregation, although this was such a given during my upbringing.

These days, a lot of congregations have a difficult time adapting to a changing society and struggle to “stay afloat”. Also, with Covid-19, physically going to church has become increasingly complicated, and I personally cannot relate easily to virtual alternatives. We are therefore still on a spiritual journey, as a family and as individuals. But life itself is a journey, and one of the most important elements of a journey are the people we meet. We had the chance of meeting various inspiring people in the Anglican community, as much as in the Roman Catholic one. The people we meet can be God’s messengers, angel-like, as the Greek word at the origin of the word “angel” means “messenger”.

I hope our family’s contributions to Montréal Dio will help to train the next generation of messengers: messengers who connect with people, inside and outside of church buildings and congregational settings, to continue to spread the Good News Jesus brought us 2000 years ago.